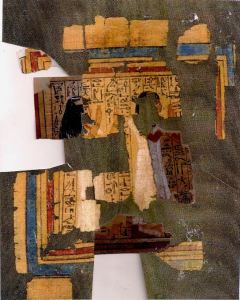 While I was at the Michael C. Carlos Museum we were able to acquire some framed fragments of Egyptian papyrus from an estate sale in Hudson, New York. The fragments were randomly put together in 2 frames in the 1950’s. Sometime later when I was consulting on the re-installation of the Egyptian collection at the Detroit Institute of Art, I noticed in their storage fragments of papyrus which looked similar to those at the Carlos. They have been given to Detroit by Egyptologist Richard Parker in the 1950’s.

When we matched upscale photos of the fragments they fit together to form a scene from the Book of the Dead depicting a man named Ptah-hotep and his wife Baket[…] who would have been standing before Osiris. The beautifully painted scene is a rare New Kingdom example from the later Eighteenth Dynasty. Hopefully, at some point, they can be joined back together.